I want to share one of my favorite projects with you all from this past week. I attended a baby shower at work for one of my favorite co workers on Thursday. She is about 7 and a half months pregnant and does not want to find out the baby’s gender, which I love. But I found it a little difficult to find a gift for her and the baby. She is always teasing me for all the time I spend on Pinterest and scrolling through blogs so I thought it would be perfect to make her something creative! Put a few pins to good use.

Here are a few shots of the process: 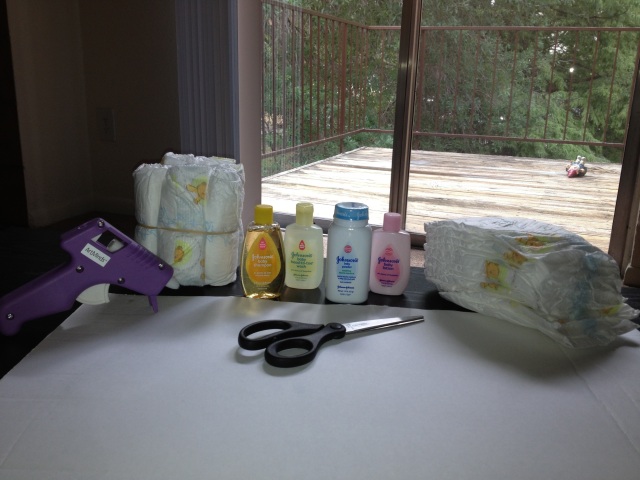 A hot glue gun
A piece of cardboard
A rubberband
A bottle cleaner
A bag of newborn diapers
A package of travel size toiletries
A blanket
A bath mit, I chose Dora
And a few other things the new momma may need 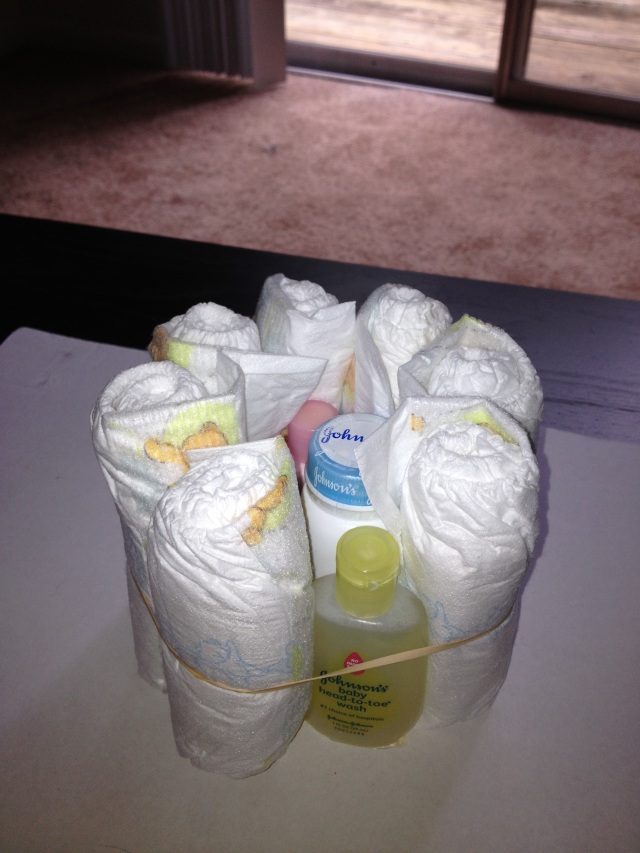 I glued the little bottles down on the cardboard and started rolling up the diapers and placing them around the bottles. I used a rubberband to hold them together, I would avoid glue so the mommy can use the diapers from the cake. I just went around and around with rolled up diapers until I felt good about the size of the cake. 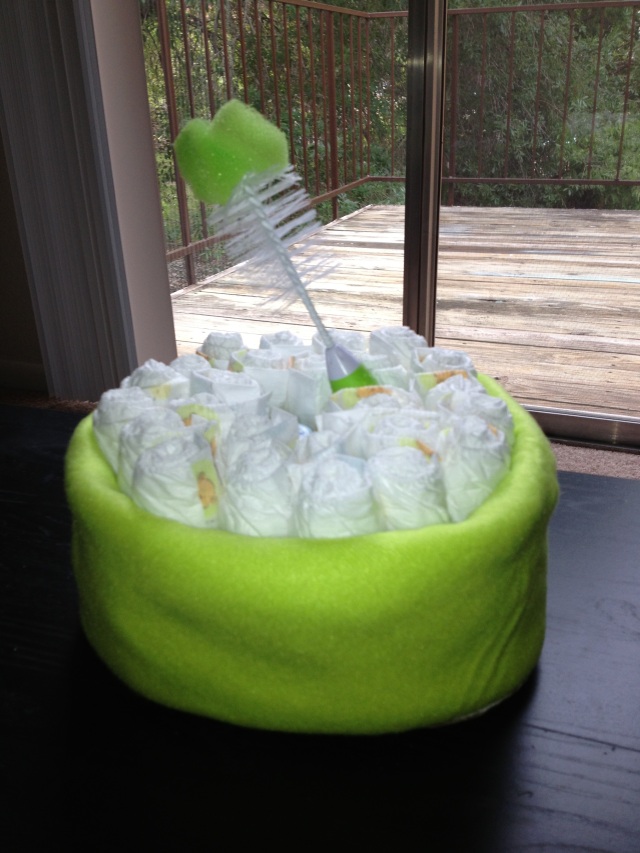 I ended up using 25 diapers, keeping them together with the rubberband. I took the fleece blanket and folded it around the diapers, tying it in a knot at the back. 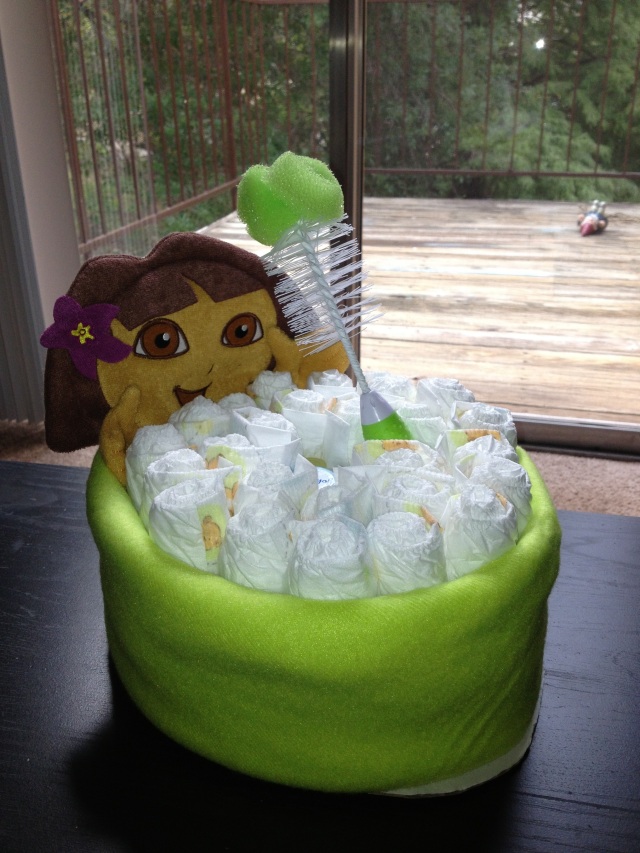 Then I stuck Dora in, making sure she was standing upright between the rubberband and the diapers. I love this shot, it looks like Dora is taking a bubble bath 🙂 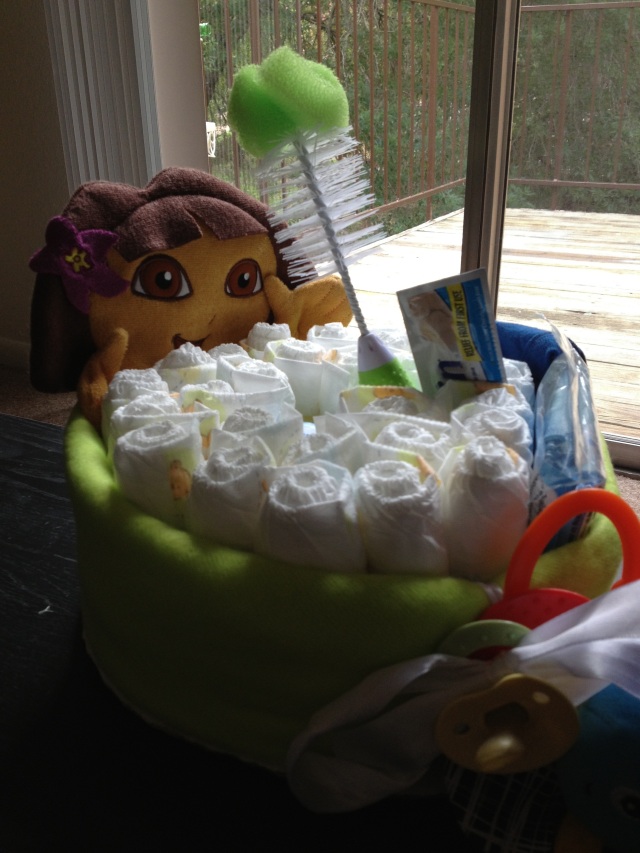 And that’s it! After that its just about squeezing in a few other gifts. I tied a little toy and a pacifier on with some white ribbon. I put in a bag of portable diaper sacks, some diaper rash cream. And the cutest little superman newborn onesie. 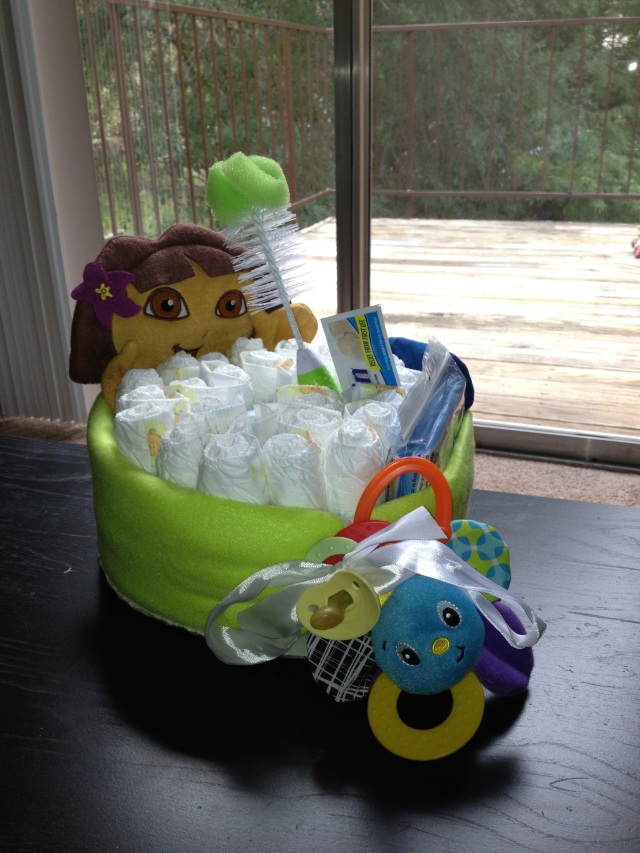 Here it is again! Unfortunately I don’t have a picture of the mommy to be holding the cake. Believe me, I tried to get one! Her response: I don’t want any pictures of me without a six-pack! Hahaha I love that! Even though we all assured her she looked beautiful! 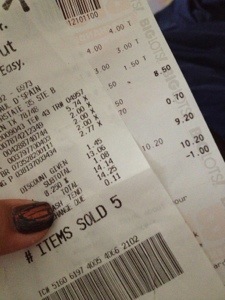 Anyhoo, this was such an easy and inexpensive project! For less than $25 I was able to give her a functional yet presentable gift! I think the only thing I splurged on a bit was the onesie. But it was so cute and worth it!

I think I made the right decision with this gift! She was so thankful and loved that it was homemade. 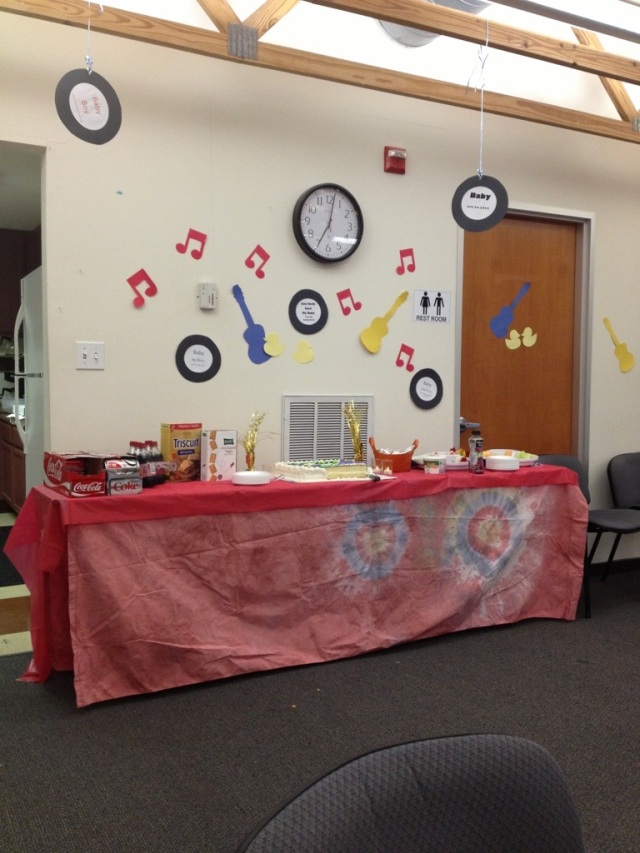 Here’s a shot of the food table for the party. The decorations committee did such a great job! It was such a great party! The mommy to be got a ton of great stuff and it was nice to hang out a bit at work.

That’s what I have to share with y’all for today. I hope you all have a great weekend! I’ll talk to y’all soon!